The following history was written in 1968 by Mattie B. Cooper, then principal of Woodlawn Elementary School.

Woodlawn School has an interesting history as it dates back to the early settling of the area by the Quakers who believed in their children being educated. The name was logical as Woodlawn Plantation was originally a tract of two thousand acres known as the Dogue River Farm, which Washington left to his niece, Nellie Custis, and Major Lawrence Lewis, who gave the name WOODLAWN to the place. Their son, Lorenz Lewis, sold the property to Chalkley and Joseph Gillingham, Quakers, who were among many Quaker families that moved into the area about 1846.

A large room in the mansion served as a meeting place and, for awhile, it was used also as a school because the Quakers were advocates of the education of every child. This arrangement was not satisfactory and thus they sought a new location. The miller's cottage adjacent to Washington's Grist Mill was chosen as the new school. The roof of the mill could be seen from the front steps of Woodlawn and close beside it the miller's cottage. The miller's cottage, standing serenely on the hill, was put in repairs and became the first school in the area. Emily Reynolds Green, who had recently married at Woodlawn Mansion, became the first school Mistress. Thus Woodlawn School came into being.

James Charles Robinson stated "interesting experiences between September 1847-1849 with the other children" attended school in a small schoolhouse near Washington's old stone mill. The memory of those school days remains as a part of me. Here I learned to write and first studied geography and arithmetic, prospering under the patient efforts of Emily Reynolds. Even so quiet a school mistress had not learned to rule without a rod at that date and many times resorted to it to enforce order."

The Quakers continued to keep the school open even though they shifted the location to Gray's Hill Mansion, where Anna S. Wright taught, and on to the Quaker's Meeting House, which is still standing at Fort Belvoir. Seeing the need for a public school in the area, E. E. Mason and Courtland Lukens each granted to the Trustees of the Woodlawn School, on October 22, 1869, property for and in consideration of the sum of one dollar, land adjoining that of each other and containing one half acre strick measure. This property was situated on the Accotink Turnpike opposite old Haddon Hall. The name of this road was changed later to Richmond Highway.

What's in a Name?

Learn more about the history of Woodlawn Plantation and the early years of Woodlawn Elementary School.

The first public Woodlawn School was a very small crude building containing two rooms with a hallway between. It was built at the back of the lot so that the cedar trees, which separated the land of Mr. Lukens and Mr. Mason, were in the center of the school grounds. They made good place for shade and to eat our lunches in nice weather. Until 1907, only one room was used as a classroom, the other for community groups.

The rooms were heated by stoves at one end and were cold more often than warm as they were poorly insulated but well ventilated. One of the early teachers sat by the stove to keep warm; thus, the clock on the far wall was out of sight. Some of the boys would slip and turn the clock up so that often school would be dismissed hours early. As there are no records attesting to the fact that the County School Board bore the cost, it may be assumed that it was built by interested parents and patrons of the school. From old School Board files the county paid the teachers, bought wood for the stove, and desks for the children. Slates were used until the School Board installed blackboards. Mr. E. E. Mason, who donated half the land for the school, was on the Fairfax County School Board as early as September 1872 at which time Mr. D. M. Chichester was County Superintendent of Schools.

Miss "Sallie" Lukens was well remembered by many of her pupils. One stated, "she made a specialty of good penmanship. Every pupil reflected this splendid art." As she had some pupils continually late, she solved the problem by locking the doors at 9:00 a.m. "Nobody was later after that rule was made". Of Miss Bertha Green, a student said, "somehow Miss Bertha made you feel not wanting to be bad". The use of school buses was approved by the School Board August 2, 1920; however, Woodlawn had free bus service for four years beginning in 1907. Due to inadequate enrollment Groveton and Snowden schools were temporarily closed. Mr. Scott Gillingham drove a wagon and picked up the children from these areas and brought them to Woodlawn.

Woodlawn School burned in 1917 or 1918. The presence of mind of one pupil probably saved many lives. She stood up and very calmly said, "The schoolhouse is on fire, we had better get our coats and hats and get out." One school board member laughingly remarked, "That was one time the school was warm enough." A group of soldiers from Fort Belvoir passing in a truck stopped and saved the children's desks. Classes were held in Haddon Hall while the school was rebuilt. The old stone foundation was used to reconstruct the two room white frame school. Stoves were installed again for heating, and thus it was ready for occupancy by the fall of the same year.

During the school year 1921-22 Woodlawn had its first library. The School Board matched funds with the Woodlawn Parents and Teachers League, each contributing $15.00. Oyster suppers were held to raise the money. At one time each family in the Parent-Teacher League contributed ten cents per month to pay the janitor. When none was available, the "teachers tended the fires."

By the school year 1935-36 the community had outgrown the schoolhouse. The school needed repairs badly but the School Board was planning a new building for Woodlawn. In March, 1936, "Mr. Woodson and a committee of men looked over several sites of land that may be suitable for our new school". The roof of the school was repaired during the summer of 1936, for in September the Parent-Teacher Association purchased a piano for $25.00, "since the roof had been fixed and it was safe to have one." In November 1936, the Parent-Teacher Association authorized teachers to purchase milk daily for undernourished children.

On May 28, 1937, 10. 485 acres of land was deeded to the county to erect a new Woodlawn School. "This land was located in the beautiful pasture land with a small wooded knoll which was named Engleside. Not too far away stood Washington's old brick sixteen-sided barn often called the round barn. The new Woodlawn School was a brick structure containing four classrooms, a library, clinic, and principal's office, and was centrally heated. It cost approximately $36,000.

In September 1937, the new school was not ready. As the old building contained only two classrooms, two teachers taught in the community house for the enrollment that had increased from 78 to 162 pupils. Before the children could attend, a bumble bee nest had to be destroyed, doors repaired, and locks installed. The new school was completed by November and on February 11, 1938 a "housewarming" was held. In 1941 two classrooms were added to take care of 219 children.

In 1947, when Mrs. Sylvia Allen was principal-teacher, Mrs. Christine Buckman was secured as the first school secretary. The second addition to the school was built in 1948 to take care of 372 pupils. This addition consisted of four classrooms, a cafeteria, kitchen, and teachers' lounge. Mrs. Sylvia Allen now became the first non-teaching principal at Woodlawn. Until 1950 there were just a few faithful members of the Parent-Teacher Association; but, at this time under the leadership of Mr. Lewie D. (Pat) Murphy, it became a very active organization with standing room only at every meeting. This participation has continued.

The school population increased at such a rapid pace that another school was built in 1952 to relieve the overcrowding at Woodlawn. The third addition was made in 1953, consisting of a clinic, auditorium, multi-purpose room and a classroom. On July 23, 1954, 6.35 acres of land were bought to provide adequate play area. Again in 1957, eight classrooms were added while the multi-purpose room was converted into a library and the kitchen was enlarged.

In spite of these additions to the school, there was insufficient space to accommodate the school enrollment. Between 1963 and 1965 two additional schools had to be built in the area to relieve the crowded conditions at Woodlawn when the peak enrollment (763) was reached.

From 1875 to 1955, Woodlawn had 33 teacher-principals or full-time principals. In the same period, Fairfax County had only six superintendents.

The author gratefully acknowledges the kindness and inspiration of the following individuals who gave valuable first hand information:

Explore the evolution of Woodlawn Elementary School in this series of aerial photographs courtesy of Fairfax County's GIS & Mapping Services. 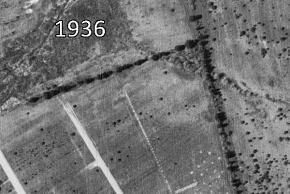 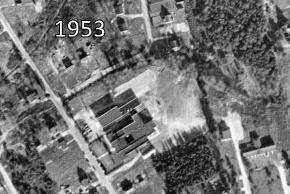 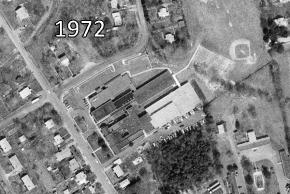 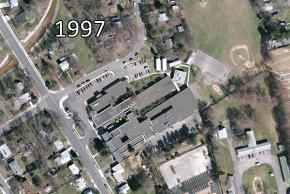 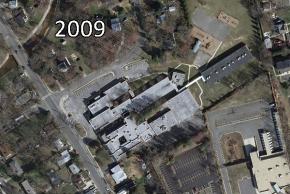 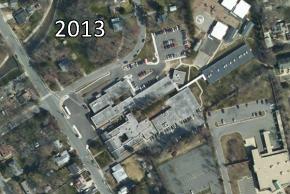 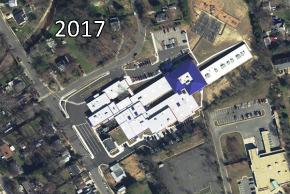