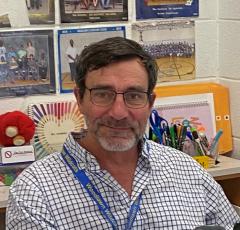 James Carlisle retired from the Army in 2015, as a Lieutenant Colonel, after 26 years.  He is married to The Honorable Karen H. Carlisle, Director, Soldier and Family Legal Services Office of the Judge Advocate General.  Together they have two adult children.  He has traveled the world, jumped out of airplanes, brokered peace agreements, run marathons and ultra-marathons.  He owned a small trucking company, grew up in South Florida, graduated from Spring Hill College in Mobile Alabama in the 1980s and earned his Master’s degree in Elementary Education in 2010.  In 2016 he joined Teach For America and moved to Walterboro, SC to teach 5th Grade math and science.  In his free time, he is a Motorcycle Safety Foundation Rider Coach, an Official for USA Cycling, the Secretary of a National Motorcycle Club for First Responders and Military, Founder and President of a STEM based nonprofit, and an Ambassador for Teach for America. He loves to travel, read books, work on old cars and motorcycles, and learn new skills.